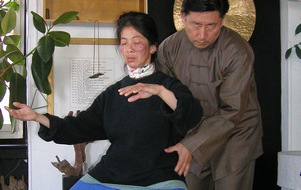 inthissa was born in Rangoon in 1952. She studied Far Eastern art and philosophy at Vassar and London, where she encountered the taijiquan she had glimpsed as a child on her way to school. She was then apprenticed for 10 years to Gerda Geddes who, inspired in Shanghai in 1949 by the sight of an old man playing taijiquan along the Yangtze estuary, later studied with Master Choy HawkPang (student of Yang ChengFu), and pioneered the teaching of taijiquan in England upon her return.

From 1977 to 1989, Kinthissa taught Yang Style 108 Form, mainly in London and Basel. She learned from Tew Bunnag the Beijing 24 Form and practised his method of combining taijiquan with samadhi bhavana in the running of silent retreats. Between 1982-89, she worked with students at the London Contemporary Dance School to find ways for them to regenerate energy and maintain awareness during strenuous training. In China, Kinthissa learnt Flying Crane Qigong, Sword Form, and the modern 48 Form. She teaches at her home in Lunigiana, in England and in Iceland.

Since 1995, Kinthissa has been studying intensively with Chen XiaoWang, the 19th generation representative of the Chen family of Chenjiagou, Henan Province, China. The profundity of Master Chen's taijiquan and the clarity of his teaching have drawn to him serious practitioners of the art from all over the world. Following his advice and under his guidance, Kinthissa holds classes in the fundamentals of taijiquan and form, including Master Chen's chanssujin ("Reeling Silk") exercises which are easy to learn and offer a lifetime's exploration, forging and dredging the energetic pathways of the body.