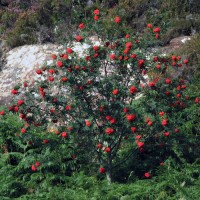 From the beginning, the stewardship and care of Holy Isle's beautiful natural environment has been high on Lama Yeshe's agenda.

With a far reaching vision, the Holy Isle Project is working to address the spiritual value of land through restoring and conserving the natural ecology.

The Centre for World Peace and Health was designed to incorporate the existing 1820s farmhouse into a new building, guided by seeking a compromise between form, function and environmental considerations. The final design minimises the environmental footprint of the building process upon the island while providing a modern facility for its guests. Wherever possible environmental sustainability has been the guiding principle:

Although still very much at the pioneer stage, the project has achieved impressive results in the last 15 years:

To get a better idea of your own ecological foot print, do the test! 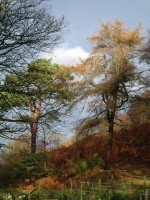 Historically, Scotland was once covered in a vast forest. However, excessive tree felling, heavy grazing, and frequent burnings brought an end to this forest. In the last few decades, mankind has become more aware of the importance of trees on our planet and many people have started to take better care of them. As His Holiness the Dalai Lama said: "The commitment to environmental protection through planting new trees and taking care of the existing ones, is rapidly increasing all over the world. At the global level, trees and forests are closely linked with weather patterns and also the maintenance of a crucial balance in nature. Hence, the task of environmental protection is a universal responsibility of all of us."

Because of its exposure to rough weather, Holy Isle was probably not completely covered in trees. Nevertheless, environmental experts agree that planting trees and allowing the spontaneous seedlings to grow is a good thing both for the island and the planet as a whole.

In the period between 1993 and 1996, 27,000 trees were planted by volunteers, guided by a professional forester. This number rose to 30,000 in 1997, and 35,000 by 2006. All the trees that have been planted are native Scottish trees, and most were grown from local seeds. Special effort has been made to plant the rare whitebeams and rockbeams that are indigenous to Holy Isle and Arran. From the beginning of the Holy Isle Project, there has been an opportunity to sponsor trees on the island, dedicated to or in memory of a loved one. Sponsored trees do not carry a plaque, but a register is kept of all sponsorships.