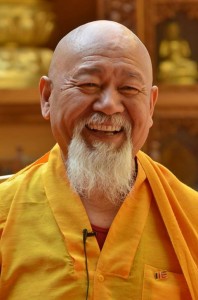 Born in 1943 in Kham, East Tibet, Lama Yeshe spent his formative years in education at Dolma Lhakang Monastery where his brother, Akong Tulku Rinpoche, was Abbot. After a harrowing six month journey escaping from Tibet as a teenager in 1959, Lama Yeshe arrived in India along with Akong Rinpoche, Chogyam Trungpa Rinpoche and a handful of other exhausted refugees. On leaving the Tibetan Refugee Camp he attended theYoung Lamas Home School in Dalhousie and left in 1967 to serve as Private Secretary to His Holiness the 16th Gyalwa Karmapa at Rumtek Monastery in Sikkim.

In 1969 Lama Yeshe joined Akong Tulku Rinpoche and Chogyam Trungpa Rinpoche in Scotland where they had founded Kagyu Samye Ling, the first Tibetan Buddhist Monastery in Europe. Five years later, having tasted and become disillusioned with modern Western culture, from the trappings of materialism to the false highs of sixties hippydom, he was reunited with H.H. Karmapa and accompanied him on a tour of the United States. At His Holiness's request Lama Yeshe and his friend Lama Tenzin Chonyi established and managed the Karma Triyana Dharmacakra Centre in Woodstock New York which is now H.H. Karmapa's main seat in the U.S.

In 1980 he took full ordination as a Gelong monk from His Holiness Karmapa, on the auspicious date of the anniversary of Lord Buddha's Nirvana and Parinirvana, at a ceremony attended by the most eminent Tibetan Lamas of the time. Following his ordination Lama Yeshe entered a strict, long-term solitary retreat under the guidance of the Abbot of Karma Triyana, Khenpo Karthar Rinpoche. Lama Yeshe Losal also received teachings from many of the highest Kagyu Lamas, including extensive instruction and initiations from his root guru H.H. the 16th Karmapa,and from The 12th Tai Situpa, Jamgon Kongtrul Rinpoche, GyaltsapRinpoche, and the Very Venerable Kalu Rinpoche. He later received specialised teachings from Tulku Urgyen who supervised Lama Yeshe's 49 day Bardo retreat of total solitude and darkness in Nepal. In 1997 Lama Yeshe was able to complete a second 49 day Bardo retreat on Holy Island in a specially built retreat-master's cabin.This rare accomplishment has made him one of the foremost meditation Masters alive today, about whom His Holiness the 17th Karmapa recently said, "If you want to know about meditation, look no further than Lama Yeshe Losal."

In 1985, at the request of his brother Akong Tulku Rinpoche, Lama Yeshe returned to Scotland to continue his retreat at Samye Ling Purelands Retreat Centre and in 1989 became Retreat Master with responsibility for the western practitioners in the cloistered four year retreat. Despite his heartfelt wish to remain in retreat for twenty years, LamaYeshe was obliged to return to the world in 1991 to take responsibility for the running of Samye Ling and also to oversee the newly acquired Holy Isle Project.

After a vigorous fundraising effort the small, but imposing, island off Scotland's West Coast was acquired in 1992 to fulfill Lama Yeshe's dream of establishing a long-term Buddhist Retreat at one end and an Interfaith Centre for World Peace and Health at the other. The beautiful island was home to rare breeds of Eriskay ponies, Soay sheep and Sanaan goats and has since become a haven, not only for wildlife but also for the many visitors who come on pilgrimage to its sacred sites, or to enjoy a wide range of retreats and courses. Under Lama Yeshe's guidance, and with the help from supporters around the globe, Holy Isle has become a model of environmentally-friendly living where humans and animals live in peace and harmony.

The new Centre, with its tasteful accommodation and spacious Peace Hall, was opened to the public in May 2003 and now hosts regular courses, interfaith conferences and retreats while, at the south end of the island, the original light-house cottages have been beautifully renovated to create a long-term retreat house for women. The first traditional Buddhist three-year, three-month retreat on Holy Island was successfully completed in March 2006 by a multinational group of women from eight different countries.

Under Lama Yeshe's direction Samye Ling continues to flourish and is now home to an increasing number of resident ordained Sangha and lay practitioners. The Centre attracts thousands of visitors who come to enjoy the magnificent temple and grounds or to attend one of the many courses on offer. In recognition of his achievements at home and abroad the title of 'Abbot' was conferred upon Lama Yeshe in 1995. One of his first actions as Abbot was to establish the Samye Sangha Foundation to help the monks and nuns become self-supporting.

Lama Yeshe Losal also travels extensively, giving teachings at many associated Samye Dzong branches around the world and participating in numerous interfaith events at the highest level. In November 1998 he received the 'Sasana Kirthi Sri' award at the International Sarvodaya Bhikku Congress in Sri Lanka and is the first Tibetan Lama to make such a connection with the Theravadin community and receive this high honour. Furthermore he was invited to tour the Buddhist sacred sites of Burma by Dr Rewatadhamma followed by a pilgrimage to the Thai Buddhist holy places hosted by Ajahn Sumedho. In the same year Lama Yeshe became the first Tibetan Buddhist Lama to act as preceptor in a multi-national ceremony bestowing full ordination to over a hundred women, including a group of eleven nuns from Samye Ling.

His charismatic presence and good humour gives Lama Yeshe the ability to connect with people from all walks of life making him much in demand as a guest speaker at many high profile events' such as the prestigious Shell International Conference at Maastricht where he was invited to speak to the top six hundred managers in 1999. A year later he attended a week long conference of the Global Business Network in Sonoma USA, where he addressed leading CEOs from many of the world's multi-national companies on the benefits of meditation.

In August 2003, on the occasion of his 60th birthday celebration, Lama Yeshe was awarded the title "Rinpoche" in honour of his commitment to establishing a strong ordained Sangha in the West, and in recognition of his achievements as Abbot and his inspiring example to many thousands of friends and students around the world. His participation in inter-faith dialogue at home and abroad continues apace. On Holy Island in August 2003, he hosted a visit of the Religious Leaders of Scotland and has forged lasting friendships with several of his fellow faith leaders. In February 2002, he attended the European Parliament in Brussels as the guest of the Moderator of the General Assembly of the Church of Scotland. Later that year, during the celebration of Her Majesty the Queen's Golden Jubilee, he was invited to a reception at Buckingham Palace where he met members of the Royal family and presented Her Majesty the Queen with a traditional silk scarf and Tibetan thanka.

Lama Yeshe Rinpoche's current focus at Samye Ling is to build the final phase of the Samye Project by completing the educational wing which will house the Samye College, Museum and Libraries. As Chairman of Rokpa Trust Lama Yeshe Losal Rinpoche has responsibility for Kagyu Samye Ling, The Holy Island Project and Kagyu Samye Dzong Centres worldwide. He is also involved in the Trust's charitable projects both at home and overseas. His energy and inspiration fuel the Trusts far reaching activities which benefit so many people in so many ways. Indeed, he is a living example of the joyful Bodhisattva in action.